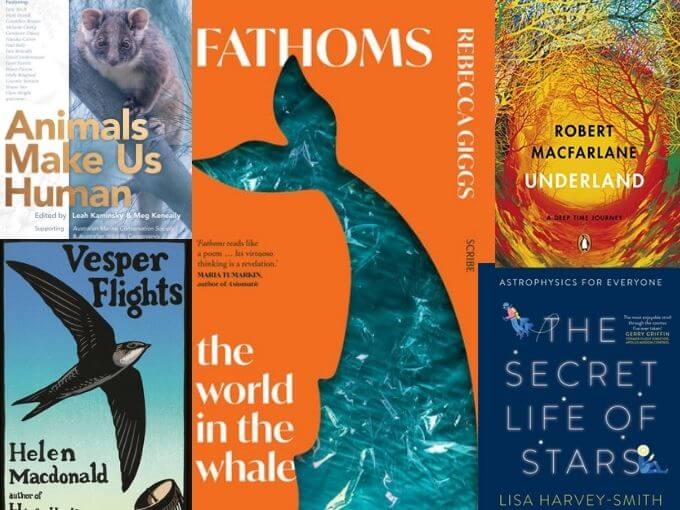 With the exception of Underland, the books listed below were all first released at some stage during the height(s) of the pandemic crisis in 2020, amid lockdowns and other challenges. I know of some authors who had the chance to defer releasing their titles while others without that option did their best to promote their work as it was born into a distracted world. I’ve heard conflicting accounts as to how overall Australian sales went over the year, although Nielsen BookScan – as reported on the Copyright Agency website – gives a positive account, but, at the very least, I’m sure scheduling disruptions or uncertainty would be stressful to everyone involved. I guess what I’m saying is – support authors and buy books! My general motto is even more applicable now.

The idea of Animals Make Us Human, edited by Leah Kaminsky and Meg Keneally, was born after the 2019-20 bushfire devastation and the critical time in which our environment, with all the pressures of climate change, finds itself. Apart from celebrating the abundance and diversity of animal life we have in this country, the book’s noble purpose is also to raise money for the Australian Marine Conservation Society and Australian Wildlife Conservancy. I began by listening to the audiobook and swapped across to the print version once I got my hands on a copy. Both are great, I want to stress. It features contributions by 44 writers about some species of animals I knew a bit about and others I discovered for the first time. The work of the 28 photographers must also be acknowledged as they are a terrific accompaniment. I learned that blue-tongue lizards can get ticks, and some stories triggered memories of my own, thanks to growing up with so much time on my grandparents’ farm on the mid-north coast. Like the sky taking on the appearance of a carpet of wings at sunset as fruit bats set off in search of food, or the delightful precociousness of certain local magpies. They all need our support.

Fathoms: The World in the Whale by Rebecca Giggs was recently awarded the American Library Association 2021 Andrew Carnegie Medal for Excellence in Nonfiction among other recognitions it has received, including being longlisted for the 2021 Stella Prize. I’d been looking forward to this book for a long time. I’m a big fan of her Granta essay ‘Whale Fall‘ and was eager for the opportunity to read her reflections on the topic of whales at length: their significance, importance, and the question marks that linger over their (and ours, too) future as we face the realities of climate change and ocean pollution. My copy is dog-eared all the way through with parts I want to reread. I don’t normally do that to books – except to those that leave an emotional mark.

I listened to Helen Macdonald narrate her book of collected essays Vesper Flights on audiobook and loved it so much I bought a physical copy for my mother – quite a twitcher herself – for Christmas. Watch this video and I think you’ll see how soothing it is to have Macdonald’s voice in your ear for a number of hours.

As much as I enjoyed Macdonald’s writing on birds – her visit to the Empire State Building to watch migrating birds is a highlight, and particularly famous (and can be read in the New York Times) – I admit I found her examination of her migraine headaches most compelling. Coincidentally, I think it was at about the time I was reading this when I found myself back at the doctors about my ongoing (and thankfully irregular) migraines. I’m always impressed by writers who can articulate their experience with that kind of obliterative, all-consuming pain and shape it to form context, even understanding, when on the other hand I emerge from my bed after a migraine no wiser and feeling like hours – sometimes days – have been wasted.

On the surface, The Secret Life of Stars: Astrophysics for Everyone by Lisa Harvey-Smith, with illustrations by Eirian Chapman, might not appear to be the book for me. It’s weird, because I love space movies (Star Wars, Alien etc.) and TV Shows (all the Star Treks!), but my anxiety triggers whenever I think about real space stuff for too long. (I wrote a poem on this theme 10 years ago.) I know I fear what I don’t understand, so I thought I’d try educating myself. Happily, the subtitle of Harvey-Smith’s book – ‘Astrophysics for Everyone’ – proved true. I appreciated the way she breaks down no-doubt complicated concepts into laymen’s-style terms, and her wry and enthusiastic descriptions of stars and their traits was entertaining. At the end, she makes a number of suggestions and recommendations. One is the ‘Sky Guide’ app which I purchased and adore. When I hold it up to the sky of a night to identify stars, with it playing its calming background music, I begin to think my experiment was a success.

Sometimes you come to know of a book through word-of-mouth or fast-spreading reputation. Underland: A Deep Time Journey by Robert Macfarlane is one of those books thanks to becoming something of an instant hit upon release. Curious, I even picked it up to read but put it down for reasons I now forget. This is where – again – audiobooks have swept in to help as I found this one utterly absorbing. My imagination could picture the vast man-made caverns drilled out under the North Sea, treacherous ancient cave systems, and the complex network of connections that exists between trees and other species of the natural world.  This book has those and so much more.