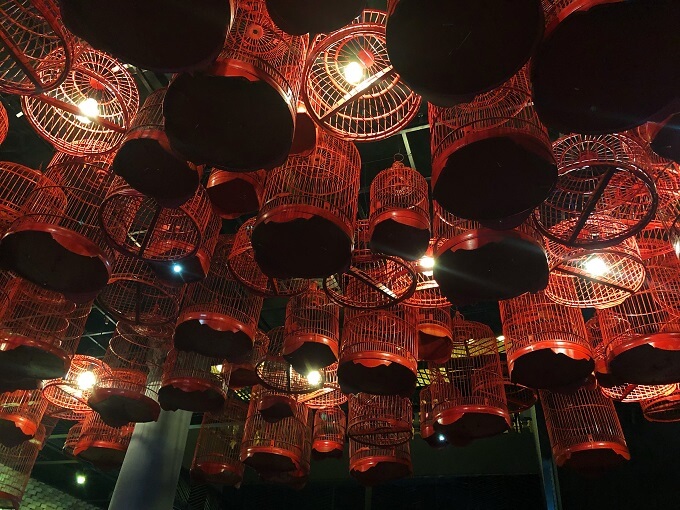 The flight from Melbourne to Ho Chi Minh is a survivable near eight hours in length. I use the word survivable deliberately, as a person who dislikes being on a plane full-stop and really begins to struggle with any flight that goes into double-digits (not uncommon when leaving Australia). On the plus side, at least on Vietnam Airlines, we got to fly over during the day. This helps me when I’m trying to think positively about the impending experience, like it’s a day at work to be endured.

I never allow myself to become excited about a holiday until we begin our descent, when the plane cuts through the last layer of clouds and the ground magically appears. This happened – sort of – as we approached Ho Chi Minh. The haze was thick, part pollution, but I recognised this too: heat. It was going to be stinking hot.

After a scare on the plane before we disembarked – I ‘misplaced’ our passports – we headed to the long immigration queue, and after we collected our bags I headed for customs to declare the medication I brought with me, brandishing my letter of explanation from my doctor. Although the Internet told me this was Very Important To Do, and I’m sure it was, the officer looked at my little bottle and waved me through with a sniff, turning his attention instead to the more important trolleys being wheeled past stacked high with sticky taped cardboard boxes.

Then we stepped out into the heat, a sticky sauna that even had Riley (who doesn’t sweat much) peppering the back of his t-shirt with dots of perspiration. We waited for our sister-in-law to join us (who was on a separate flight from Sydney) and then we were on our way, thanks to our driver.

We only spent a few days in Ho Chi Minh City and so I’m certainly no expert and don’t pretend to be. These tips are what I gleaned from our experience there and hopefully improve yours! Because if you don’t have a local sim card, and you’re stuck in the heat with no wi-fi, tempers can fray fast.

1. Get your visas sorted in advance (to save stress)

Our travel agent organised our visas in advance, but it is possible to do this yourself online. This is a critical step in being allowed into the country so I suggest you google the topic &/or get advice. The one thing I will add is that the Visa on Arrival queue was long when we arrived. Standing in that after a long flight would be most unappealing, so I’m glad I didn’t have to (especially as immigration is another queue on its own). Smarttraveller has information on medication, visas and more.

Organised chaos abounds in the cities, with tens of thousands of motorbikes and cars. It’s fascinating to watch people pass by with the seemingly impossible crammed onto motorbikes – groceries, entire mobile kitchens for street food, enormous boxes, families and children. And while we were never stuck in a traffic jam, there were frequent periods of congestion. On the map, I might’ve assumed it would take about 20 minutes to get from point A to B, but it often took more than this in reality. There is also constant horn beeping, usually to warn others that you’re overtaking. Anyone with sensory sensitivities should be prepared.

3. Embrace the chaos and get out there walking

Yes, there are pedestrian crossings with green figures to show when you can walk. Do people pay attention to them? Errgh… I guess? We were warned about the traffic (see point three) and there is a great phrase we used: “Keep a steady pace and walk with confidence!” It worked. Let me explain why. Local drivers are used to weaving in and out of the way, so if you pick your moment to cross and keep your pace steady, they can anticipate where you’re going and therefore know how to avoid you. This leads into the second part – if you stop in the middle of the road like a scared animal while walking, that’s more dangerous. At least in my experience, for there were a few times I lost my concentration and didn’t know where to move to next. That’s when I got beeps and felt the hemline of my dress swish as a moped flew past. So definitely keep a hand on your little ones. I perhaps was a little overbearing on my teenagers, automatically clutching their hands whenever I felt a vehicle got too close. That annoyed them both eventually, and probably went against the guide we were trying to uphold. So I let them be and they both came home 100% intact.

The travel guides all talk about it, and with good reason. If you watch the video at the bottom you’ll see them in more detail. 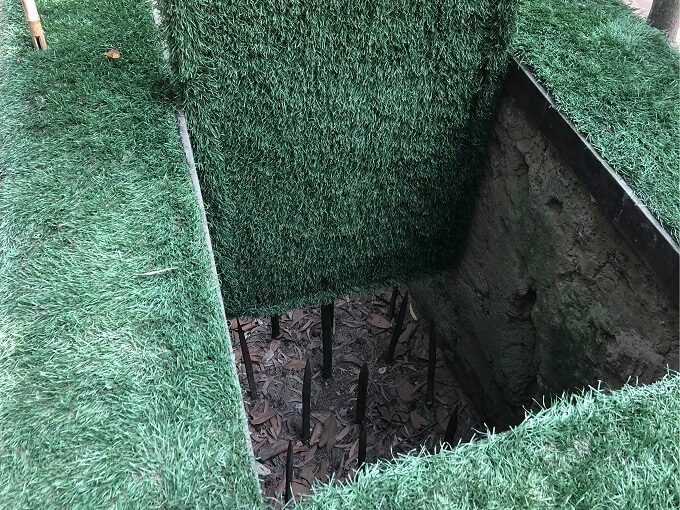 The tours usually take five hours from start to finish – and these often include a ‘spontaneous’ trip to a lacquering factory on the way home. It’s a tight schedule that I appreciated, but I did insist on one thing. The Tunnels are situated right next to the Saigon River. When visitors arrive or leave they are encouraged to visit the toilets before moving on. I spotted the fast flowing, wide river and could tell at a distance how impressive it was.

“Are we going to go down there and look at it?” I asked.
His answer was confused. No, why?
Uh, because it looks beautiful, I thought.
“Well, can I go take a look?”
“Sure. Quickly.”
I’m glad I did. Stunning. 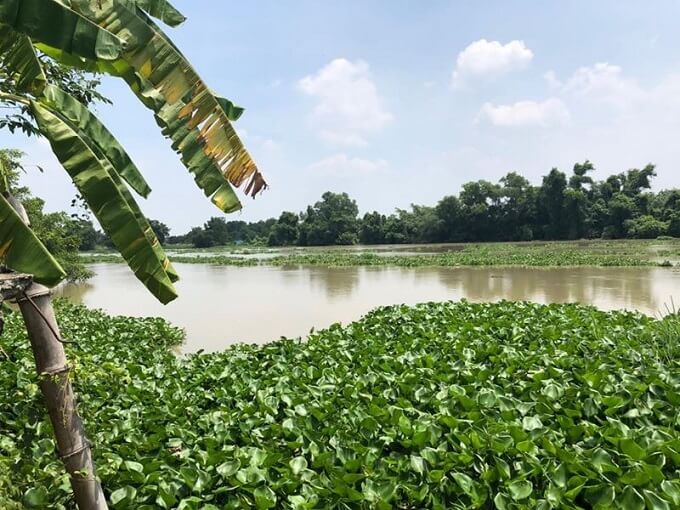 People being shown around in tours are offered towards the end a snack the Vietcong used to eat – steamed tapioca dipped in a blend of ground up peanuts, salt and sugar. It was good! But do take note of that if you have someone with you who has a severe peanut allergen. Peanuts crumbs are all over the tables.

One last note – you have the option of spending US$35 (approx) to go to the firing range at the tunnels to shoot a round of ten bullets. Whether or not you choose to do so is up to you (we didn’t), remember it is very loud.

5. Go to the Ben Thanh Market

The Ben Thanh Market is the largest market in Ho Chi Minh and certainly one of the country’s most historical. Like many large markets we’ve visited, such as the Grand Bazaar in Istanbul, it is a powerful, even overpowering, experience for all the senses. There are sights and smells (including durian and fish, so be warned) and noises everywhere. The heat is trapped under the cover of the roof and even a large number of fans do little to circulate the air. But if you’re a shopping fan, you’ll most likely take all that in your stride in the search for a bargain – for there are many to be found. Yes, the brands may not all be authentic, but there are undoubted savings on sportswear and sneakers. Do look around because most stalls offer the same clothes and you could get a better deal just a few vendors along.

I much preferred the night markets. There is a swift transition between the day sellers and when the night sellers roll out their wares and set up. These are just outside on the street, complete with various dinner options, and with the sun’s oppressive heat gone it was a more pleasant shopping experience. Do note that while websites say these markets start at 6pm, they’re really not fully operational until 7pm.

And as we were staying a 15-minute stroll away, getting back to our hotel again was easy. We stayed at the Saigon Prince Hotel and highly recommend it. 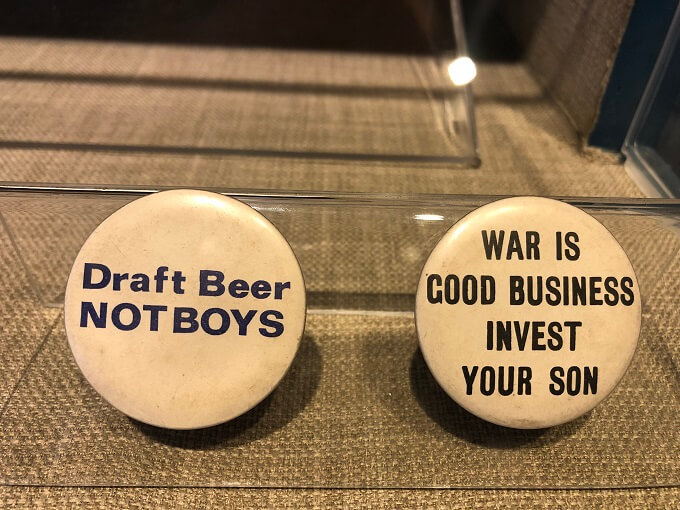 When we were getting immunised (Hepatitis A and Typhoid) before we left, our nurse asked us where we were going. Upon learning our destination, she said, “Oh you have to go to the War Remnants Museum. Just be warned – it gets more confronting the higher up the building you go.” I can see her point, but in truth, the whole museum is confronting – and heartbreaking. The exhibitions are very photo-heavy and I noticed the visiting children/teenagers (there were a lot) paid these a lot of attention; mine certainly learned a lot. But the content does get graphic.

While the exhibitions rooms on the first level and higher are air-conditioned, there are minimal seats inside and you need to go back out to the balcony area to sit and rest. Something to think about if you’re tired (we were so jetlagged) or if you’re overwhelmed and need to take a moment.

There is a coffee place (a chain called Highlands Coffee, we liked it a lot) on site and waving down a taxi on the street outside was easy.

It was a fascinating city. Intense, but wonderful. The people are so friendly. I haven’t even gone into the famous food, I will later in a separate post, but let me say it lived up to expectation. Have you been? What did you think?