You can read Part 1 (Ho Chi Minh) of our travels to Vietnam here.

Hoi An was planned as being the dedicated ‘rest’ part of our trip and I admit I anticipated this part the most. The beach! Cocktails by the pool! Buffet breakfasts! Reading on a cabana!

1. Figure out how you’re going to get around

Ahead of time, I looked up our hotel – the Boutique Hoi An Resort – on Google Maps to try and figure out if we could walk into Hoi An or not. It became pretty clear once we got there that that would be tricky. 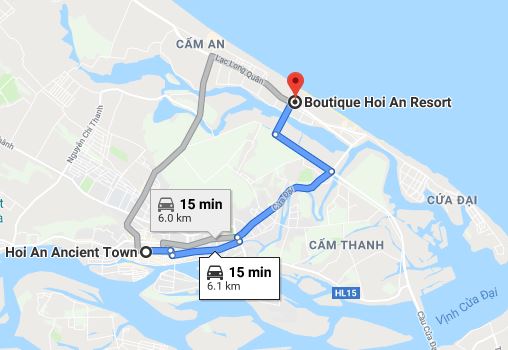 Walking would take up to an hour. There were a few short cuts across rice fields, but you needed to know where you were going and still would need to contend with the road traffic. For this reason, bike hires were common. The hotel ran a shuttle service, but we never seemed to coordinate ourselves to catch it and it only went every two hours or so. A taxi into town cost – on average – a reasonable 98,000VND ($6.00AU), so we ended up taking these instead. We travelled as a party of five most of the time, which required us taking a larger sized taxi van. I worried this would be a problem, but it never was.

Of course, there are many accommodation options in town, but I’m so glad we opted to stay on the beach instead. 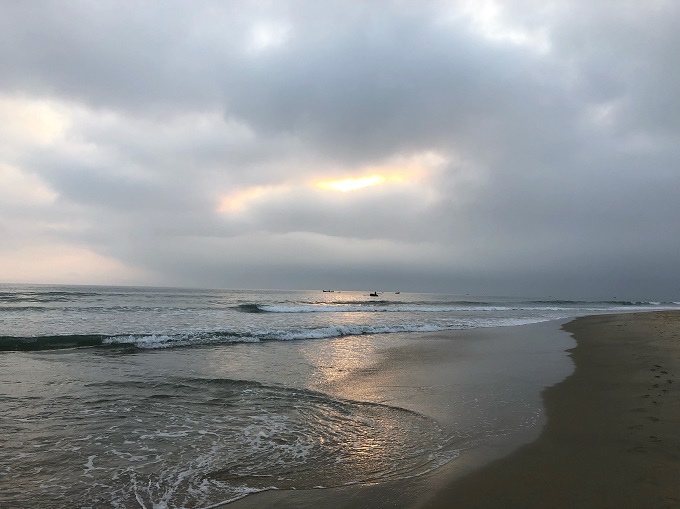 2. Get your hotel to help you

I’m a pretty independent traveller, used to Airbnbs and googling the answers to questions on the hotel wifi rather than ringing up reception to see if they can help. Well, I had to swallow that pride the morning I went up to the front counter in Hoi An to ask them about doctors. I’d awoken with a blocked ear from swimming the previous day. Not a big deal (It happens to me a lot. I’m pretty waxy. Sexy, no?), except the ear was also quite sore and I was a little dizzy. Classic signs of an early middle ear infection.

The reception staff (who were stellar) were right on it and rang a doctor in town who told me upfront what his services would cost: 2.6 million VND for a hotel visit ($160AUD) or 2 million VND ($122AUD) to visit his clinic. I could’ve hopped in a taxi, but I thought if I was going to claim this on travel insurance anyway I could get him to come to me. He did, within the hour, syringed out the wax and left after leaving the medication for the infection he confirmed I had. I counted myself lucky.

As it turned out, I might’ve gone to him if I’d known that our travel insurance had a $250 excess. So I fell into that grey zone of being sick enough to need treatment but not being sick enough for coverage. While also being thankful that the ailment wasn’t more serious/expensive. Because we’ve been there – at least it wasn’t a broken arm, eh?

2. Remember there are things you can do yourself

We encountered a situation on this trip I don’t think we had before. After a morning exploring, for example, it was so hot we would have to change into fresh clothes. We’ve always been careful packers, and this conservatism (even though we bought some clothes) had us seeking out laundry services. The hotel’s was a little expensive, but there were places nearby that did laundry, charging people by the kilogram. It was cheap and it would be available to be picked up late in the afternoon on the same day.

I’m going to do a separate video just about all the amazing food we had over in Vietnam. Our dinner bill would often come in between 700 – 900,oooVND ($42-55AUD) for five people, including drinks and sometimes even dessert.

Families are treated very well. We were out at dinner one night and a family nearby had a young toddler and this child was doted on by the restaurant owners. Even my big kids, now in their teenage years, were cooed over. If you have any questions or requests regarding food, the locals will do their best to help you. Sometimes you will need to clarify if ‘vegetarian’ means there’s no meat in the dish whatsoever (sometimes seafood can slip in). Our vegetarian eater did sometimes get a little tired of somewhat limited options, but that’s more indicative of a particular establishment. Tripadvisor can help you decide where to eat, but, honestly, the one place we made a reservation to go to was okay, but didn’t quite reflect the glowing reviews it had on the platform. Dining really more became one of those things you had to judge on the spot and go with your gut feeling (no joke intended).

4. Hoi An Lantern Festival – be prepared

Hoi An is famous for its tailoring/clothing industry and the Lantern Festival. The Lantern Festival is held every month in accordance with the lunar cycle, so if you’re in town during the full moon you’ll be in luck. Quite by chance, we were. You can search online for the dates to see if you can coordinate yours to match. You’ll see a bit more in the video below about it.

Logistically, I can see how it could get tricky if you have little ones. It’s not necessarily a late night – it was dark just after 7pm and things are in full swing by then – but as the town lights are turned off it could pose a challenge if someone wanders away by accident. We have a plan with our kids if that ever happens to them (stand still until someone finds you) and it might be prudent to come up with something similar if you worry about that. This goes in any foreign place, but especially if there’s an additional water hazard too.

Smaller notes can often be a pain as they don’t buy very much, but we saved ours for the very purpose of getting a paper lantern each for the kids to launch into the river. They all look lovely bobbing along on the surface, but I do wonder about their environmental impact.

Let me be clear: there were a lot of people. But it was gorgeous. 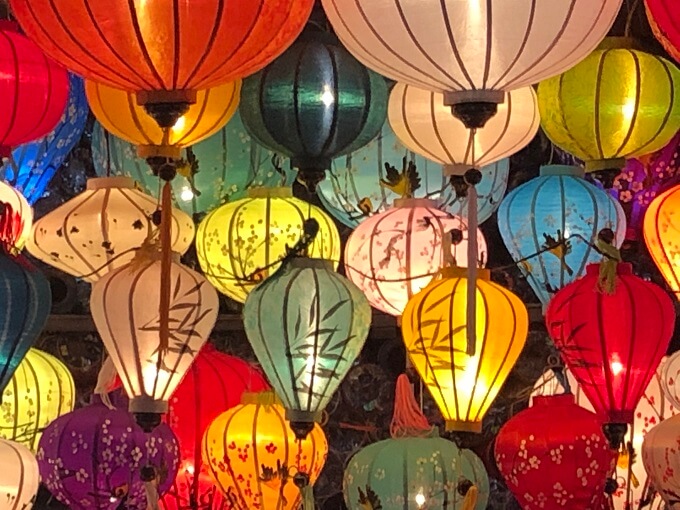 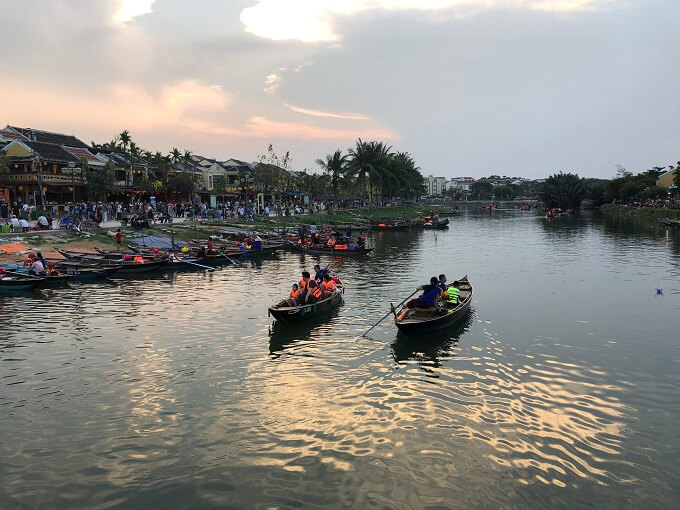 Sunset as the locals ready themselves for the Lantern Festival.

It’s also an idea to manage children’s expectations once their lanterns go out into the water. Just in case. The flame could go out, it could get knocked over by the oar of a boat, or any other number of things. Riley experienced the frustration of having his being carried back to land on the current. Not a big thing, but I thought I’d mention it.

This is where doing your research in advance comes in handy. We had shop recommendations from people before we left, but we didn’t get to visit many of them. This is when it’s important to learn to say no (politely) when you’re browsing. We ended up making a few purchases from one shop and while the kids did have one fitting, once we picked up the garments I wasn’t too satisfied with their quality. The tailor at our hotel, though, had multiple fittings and the fabrics were better quality. If you get an off-the-rack pineapple shirt or a watermelon one (there’s lots of kitsch, it’s fun), anything bright and with a lot of dye, you MUST do a colour fast wash cycle.

The case is similar with shoes. I had a few pairs specially made and I had a fitting on a pair of high heels and they just didn’t feel right. So they took them back and reinforced the heel. I’m still not 100% sure whether they’ll stand the test of time, but we’ll see.

Let me know if you’ve ever been to Hoi An. Isn’t it great?