There are parts of the early days of parenting that can’t be easily forgotten. Take my second born, for example. Riley was an infamously picky eater, and I mentioned this here on the blog on occasion. Cheese, plain pasta, tomato sauce, yoghurt and potatoes (fries) were his five staples. And even then not always. 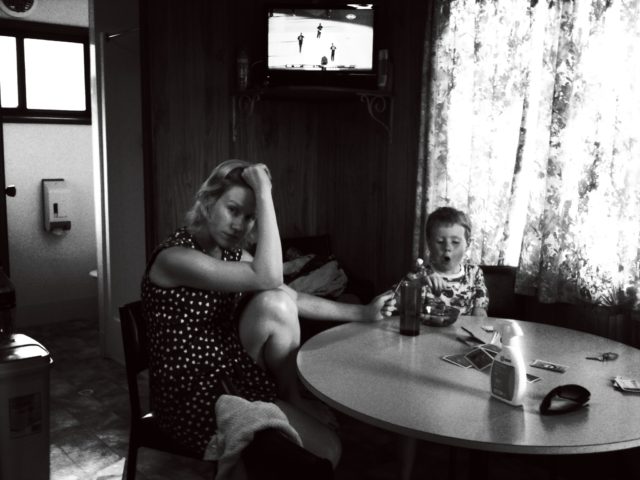 The above photo was taken while we were on a quick getaway weekend and there’s the old saying that for parents a ‘holiday’ just means that real-life gets moved elsewhere for a bit. It’s not ‘relaxing’. And here I am at dinner time, holding up a fork with food on it when he was very much at an age where he could hold it for himself, thoroughly and wholly at my wit’s end. There’s something about the candidness of the scene that resonates. You get a glimpse of the toilet, there’s a game of cricket on the television that we’re not watching, our backs are turned. Playing cards, sunscreen, glasses and the cabin key are scattered on the table. I’m grateful Adam chose that moment to take the shot. Half a minute earlier or later and it could’ve looked very different. 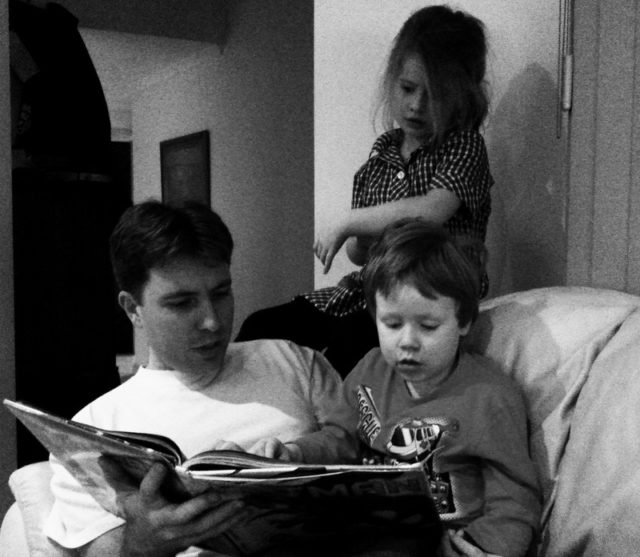 Another image that hits a sentimental nerve is this one. Keira was midway through her first year of primary school, still putting together words and as soon as she was capable enough did not want us to read to her anymore. As a parent who enjoyed reading aloud – and volunteered at school during reader times – this transition came with some grieving. On the other hand, Riley took longer as he didn’t mind being read to. Even in the middle-to-late years of primary school, I could count on him sitting down with me with a few picture books – especially if he was running behind in the Victorian Premier’s Reading Challenge.

As an aside: a bonus significance is that they’re reading a book about the evolution of the character of Batman over the decades (that’s all I can remember about it) and as comics have sometimes been the ONLY way I’ve encouraged my reluctant reader to read, I cheer for them all!

It’s fitting that I mention my family and reading in this anniversary post. For a blog that was born out of a period of very serious postpartum mental health issues, it was also a means of sharing that experience with others while simultaneously working through those tangled, intrusive feelings. It was imperfect, raw and – yes – retrospectively – had a few cringeworthy moments. But my major loves – family, reading and writing  – kept it going, and still do so.

Sometimes I wonder, why am I still here? Why go on? Many (most?) mother bloggers have come and gone since I began in 2006. I suppose it shows I am nothing if not stubborn. But there’s more to it than that. I still believe that blogging (and by extension to that I include journaling/memoir, either online or off) is a worthy and significant practice. I’ve ESPECIALLY repeated this to myself this year when my mental health has dipped to its worst levels since 2014 and the ‘why bother?’ voice has whispered with increasing frequency. But the act of sitting down here has helped nullify the waves of very real shame that occasionally wash over me and turn things topsy turvy. I remember it’s a strength to admit to pain, to ask for help – not a weakness. And, by extension, that my work helps others too.

The dominos fall for good, yes they can. Yes, they do.

So thank you, blog, for being a touchstone and happy 13th birthday (as of Sunday – which is also my dad’s birthday). What a ride so far.

And thank you for reading.  x