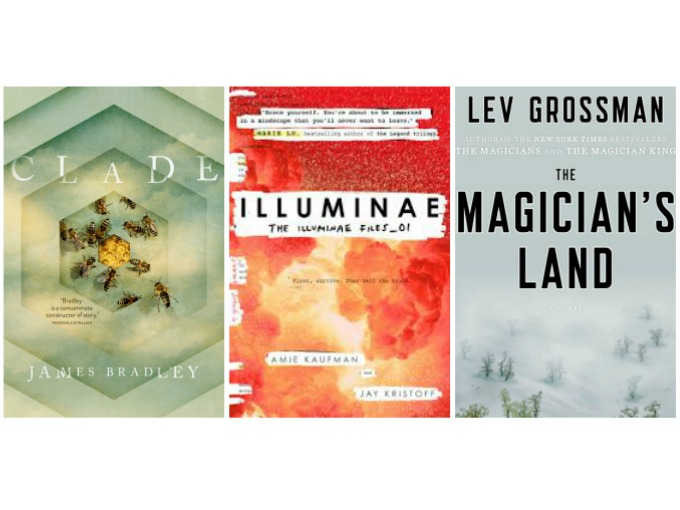 I couldn’t believe my luck just after Christmas when I checked out a local Little Free Library to find Illuminae by Amie Kaufman and Jay Kristoff. It’s the same book I’ve heard such good word about from people’s opinion that I respect that I started recommending it by that alone. Once I was about a quarter of the way through I understood why it’s getting the buzz – not to mention movie deal – and kudos. It’s space opera meets zombie pandemic (with a bit of Stars Wars heroics thrown in for good measure)  and is very entertaining. It’s marketed for YA readers, but if you have younger readers who are on that borderline and wonder if it’s appropriate or not it might help to note that the swearing is censored and the sexual references aren’t too lewd. I’d say it would depend on the child – or adult. I think Adam would like it too, actually.

In the newspapers around the end of the year, as they published their 2015 ‘Best Ofs’, Clade by James Bradley ranked up high on many critics’ fiction lists. I sat down with it on New Years Eve and read it in (pretty much) a single session. I won’t lie – by the time I reached halfway, I wondered if it was the wisest book I could’ve chosen to finish one year before beginning another. With its postulations of how humanity will deal with the ramifications of climate change once the world passes the environmental tipping point, as a vision it was sobering (and I wasn’t even drinking!) but, yet, still hopeful. By the end, I thought that, in fact, perhaps it was the best book to read at such a juncture: anything that arms you with hope can only be good.

And last, as a treat to myself, I’m finally reading The Magician’s Land, the last in Lev Grossman’s Magician’s trilogy. I’ve been a big fan of Grossman’s work. I only needed to crack open the book and read the first page before I felt that wonderful feeling you might be familiar with when you return to a fictional world that’s brought enjoyment; it’s like a homecoming. I’m deliberately not rushing, so I’m only halfway through, but even when the end does some I can tune into the first episode of the television show. I hope it’s good too!