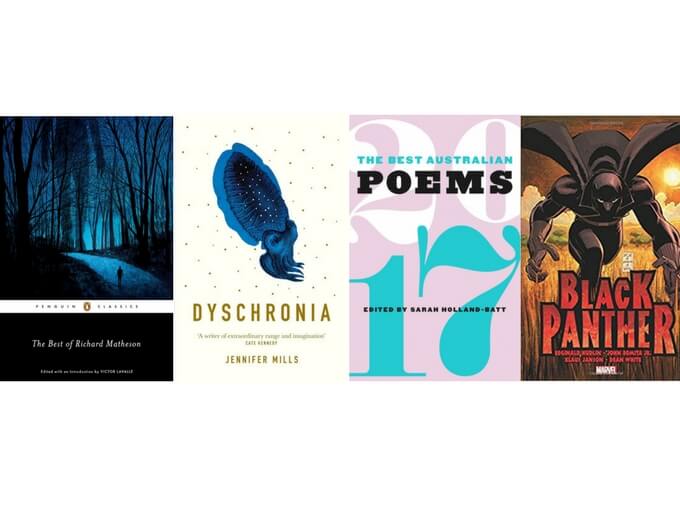 There will be no new podcast episode of The Creative Life this week – I’ve been wrestling with a headache that refuses to go away and threatens, at any moment, to turn into a migraine. The tasks I’ve been able to do – such as writing this post – have been fit into the pockets of time where either the painkillers are working or I just grit my teeth and push through the pain because I don’t want to take too many drugs either.

In setting the scene thus, it is darkly fitting that the first book I finished was Dyschronia by Jennifer Mills. Why? I’ll get to that in a moment. Dyschronia is the third novel from Mills who, I believe, is one of the country’s best writers and she’s given herself quite a challenge, both thematically (to write about a not-implausible, horrifying future of environmental destruction) and structurally (constant time shifts and several POVs).

But it is her descriptions of migraines that I found really arresting – they were terrific, possibly the best I’ve come across. How migraines aren’t just felt in the head but the body’s totality and that systemic connection is shown to have its parallels in our environment (change begets change, for the worse in this instance).

And just look at this line: “The steel makes a sound like flocking parrots.” As soon as I read that I heard the sound in my ears and I thought ‘Perfect’.

I picked up the pretty new The Best of Richard Matheson from the library because I am a fan of I Am Legend, but that was the extent of my knowledge of Matheson’s work. A shame, really, and something I want to rectify because of his great influence on great writers such as Stephen King, Neil Gaiman and Peter Straub. The fact this book is short stories is a boon because I love them and I can read those in smaller bites when my head hurts. Unfortunately, I haven’t gotten very far as yet and can’t really offer an opinion.

The same goes for these next two titles as well: Black Panther: Who is the Black Panther by Reginald Hudlin and Best Australian Poems 2017 edited by Sarah Holland-Batt. I’m halfway through Black Panther, mostly because whenever I try to sit down with it I find it missing thanks to certain other family members pinching it. I wanted to finish it before seeing the movie, but I don’t know whether that will transpire or not. And I’m still getting through Poems – a reading experience I’ll savour even more due to the fact that Black Inc will no longer be publishing the ‘Best Australian Essays/ Poems / Stories’ series. I know publishing is a business, so I understand if this decision is based on dwindling or unsatisfactory sales, but that makes the news no less sad! It leaves some questions: will this concept be picked up in some form by another publisher? If so, which one?

What are you reading this month? Are you sad about the cessation of the ‘Best Australian’ series?