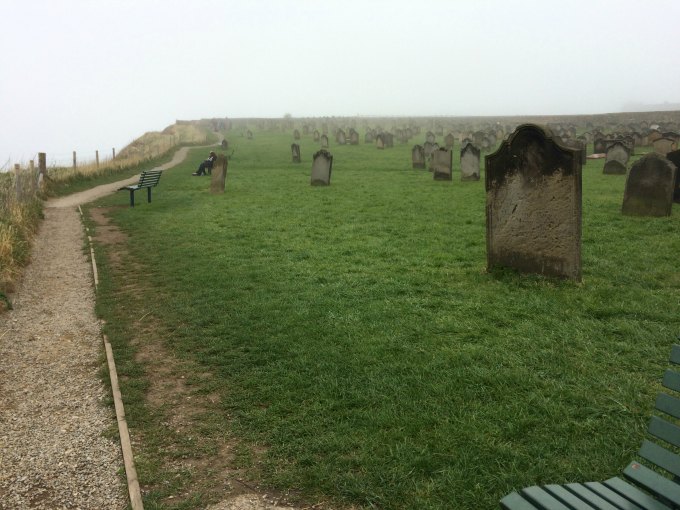 Then as the cloud passed I could see the ruins of the abbey coming into view; and as the edge of a narrow band of light as sharp as a sword-cut moved along, the church and the churchyard became gradually visible. Whatever my expectation was, it was not disappointed, for there, on our favourite seat, the silver light of the moon struck a half-reclining figure, snowy white. The coming of the cloud was too quick for me to see much, for shadow shut down on light almost immediately; but it seemed to me as though something dark stood behind the seat where the white figure shone, and bent over it. What it was, whether man or beast, I could not tell; I did not wait to catch another glance, but flew down the steep steps to the pier and along by the fish-market to the bridge, which was the only way to reach the East Cliff. The town seemed as dead, for not a soul did I see; I rejoiced that it was so, for I wanted no witness of poor Lucy’s condition. The time and distance seemed endless, and my knees trembled and my breath came laboured as I toiled up the endless steps to the abbey. I must have gone fast, and yet it seemed to me as if my feet were weighted with lead, and as though every joint in my body were rusty. When I got almost to the top I could see the seat and the white figure, for I was now close enough to distinguish it even through the spells of shadow. There was undoubtedly something, long and black, bending over the half-reclining white figure. I called in fright, “Lucy! Lucy!” and something raised a head, and from where I was I could see a white face and red, gleaming eyes.

If you watch the video below, you’ll see that we encountered strange weather as we approached Whitby – a strange, fast-moving fog that swept across the moors. There wasn’t a cloud in the sky when we left York, but visibility by the time we were parking our car in the Whitby Abbey carpark was virtually zero.

“So… what’s going on with this weather?” we asked the ticket booth attendant.

Armed with this (little) bit of hope, we entered the grounds of Whitby Abbey. I’ve long professed my interest in the place – we don’t have pictures of the children on our bedroom wall, but we DO have a picture of the abbey (seen in this video at the 3.07min mark). Bram Stoker drew heavily from his time here, using elements from local legends while writing Dracula, my favourite novel. In the story, Dracula lands in English soil at Whitby, jumping onshore during a ferocious storm in the guise of a dog to then run up the cliffs to the churchyard. It’s not specifically stated that he takes refuge in the abbey itself, although this is the general assumption. That would be pretty hard, given its state of ruin, although there are some pretty dark nooks and crannies – so you never know! But, as you can read in the excerpt above, the churchyard is where he first bites Lucy, thus beginning her transformation into a vampire.

Anyway… back to when we arrived. Visibility was poor. As you can see. 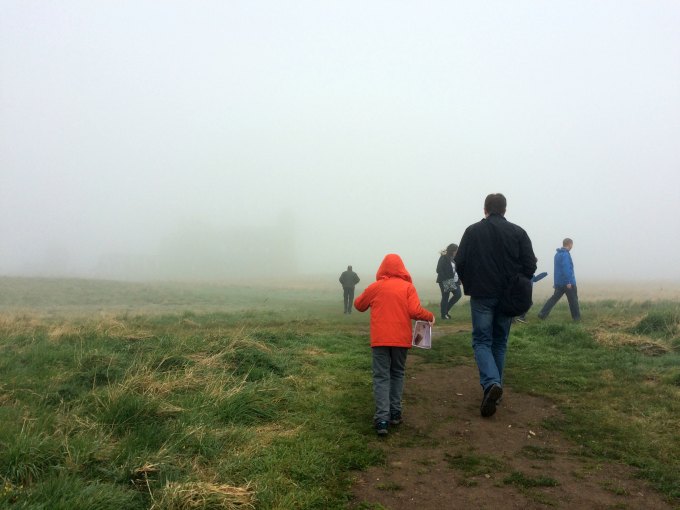 I kept my phone poised, ready to take a photo of the silhouette the moment it came into full view. 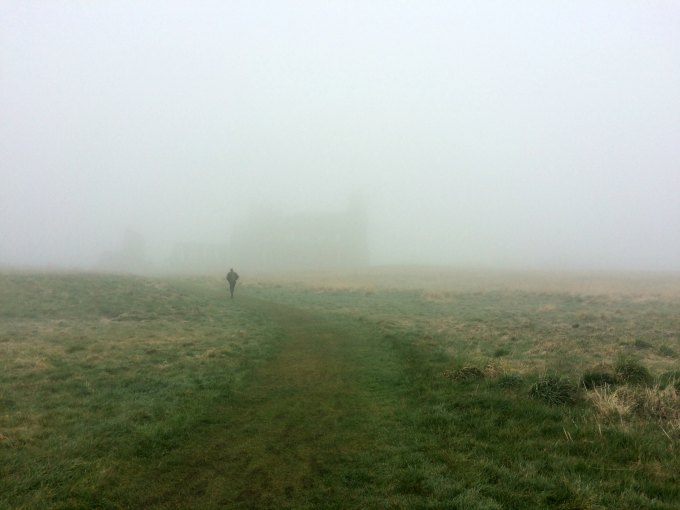 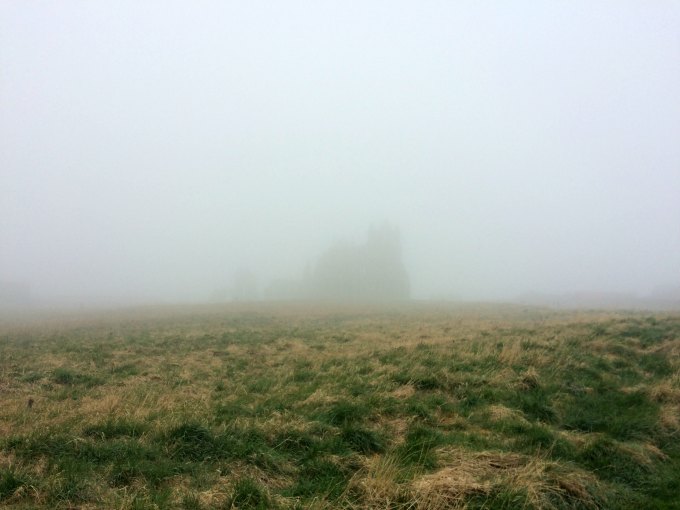 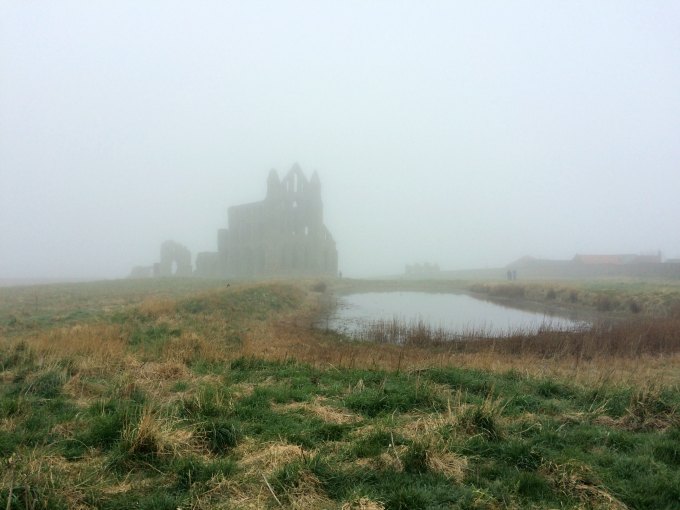 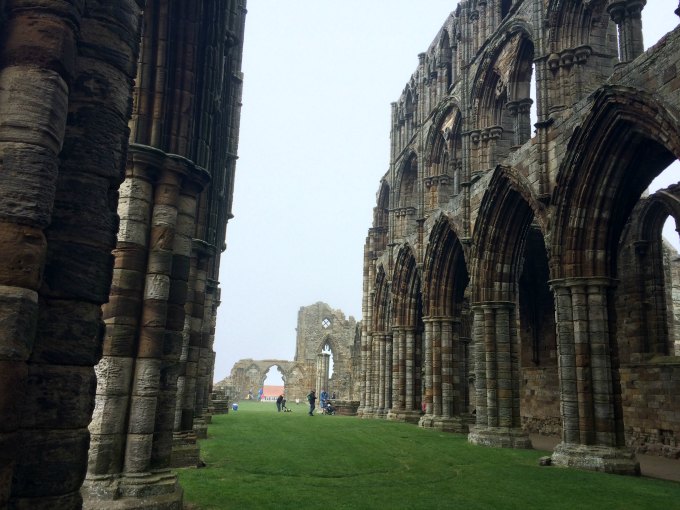 We spent some time wandering around the ruins before heading across to the magical views from the church’s cemetery BECAUSE LOOK IT’S GORGEOUS. 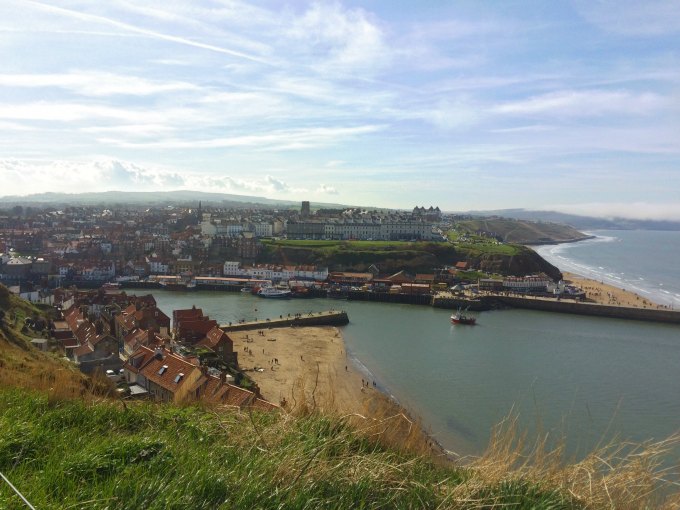 This is also the exit/entrance point to the famed 199 steps of Whitby, so there was a lot of foot traffic going past. By this point, the fret really had demonstrated a personality, blowing across to reveal clear skies, but hovering just off the coast, ready for another passing. You can see it below. 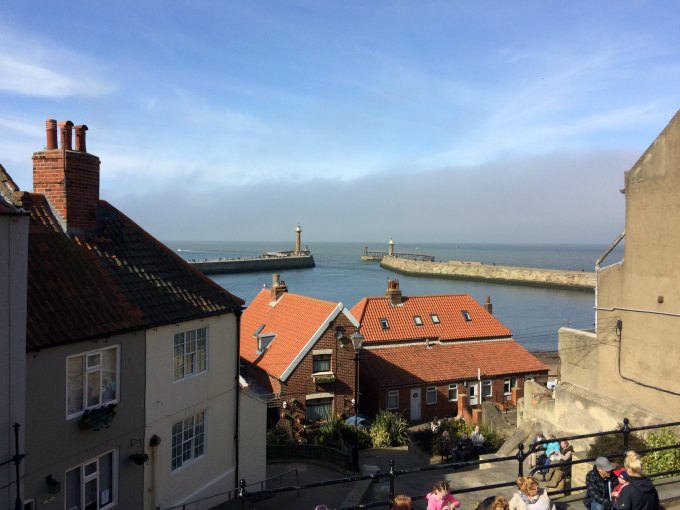 We hopped back in the car to find our hotel after we explored the abbey, and by the time we made our way across, the fret I shot above had decided to move over. 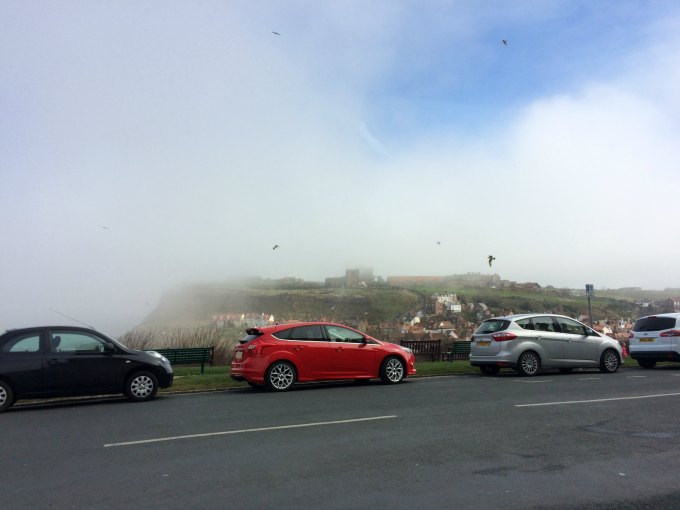 But things change so quickly! It was lunchtime and I shot the below picture out of the window of the cafe (fabulous view, right?) 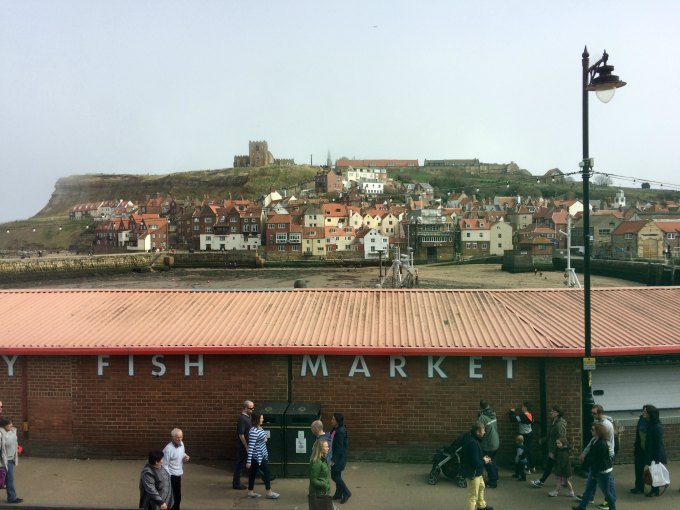 (BTW – this will go down as one of my poorest food choices in the whole trip. Why? It’s a crab sandwich. Why is that bad? Because I hate crab. So why order it? Because I thought to myself, ‘Whitby is supposed to have the best fish and chips in the world. So surely their crab will taste like lobster, and I like lobster.’

Did it taste like lobster? No. No it did not.

A new family saying was born from this experience: ‘That’s a crab sandwich’ means the result from a poor decision.) 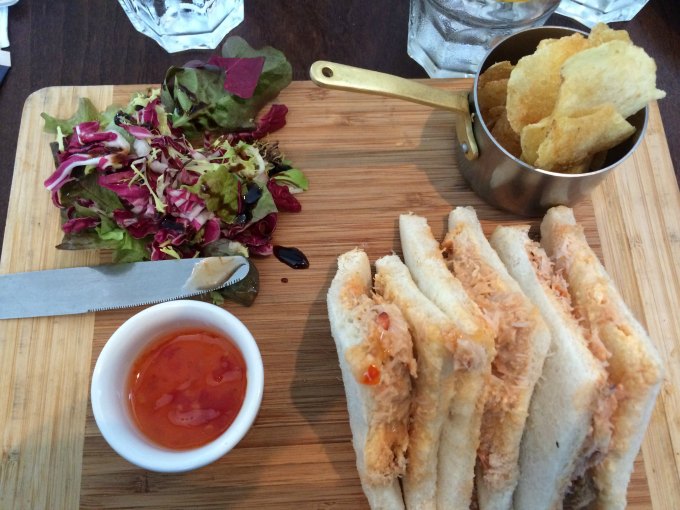 The food might have been iffy, but look! An hour later, the fret, the last one of the day, in fact, passed and we had sunny skies for the rest of the afternoon! 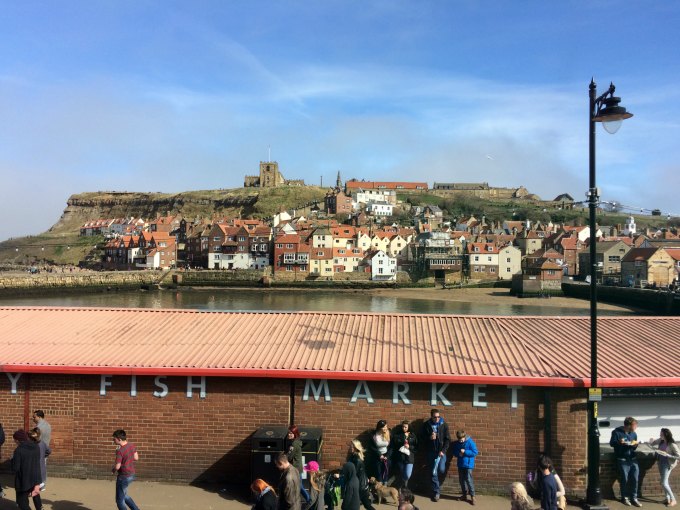 We passed the time by walking along the long pier, which had beautiful views back across to the church and Abbey. 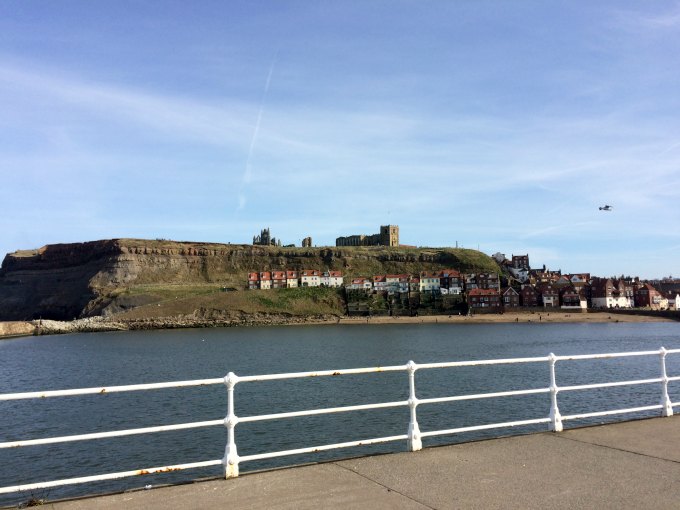 The kids wanted to go down to the beach and I took them, even though it was freezing and Riley got sand everywhere. Adam passed, preferring to go back to the hotel room, but I’m glad I went. It was very calming. 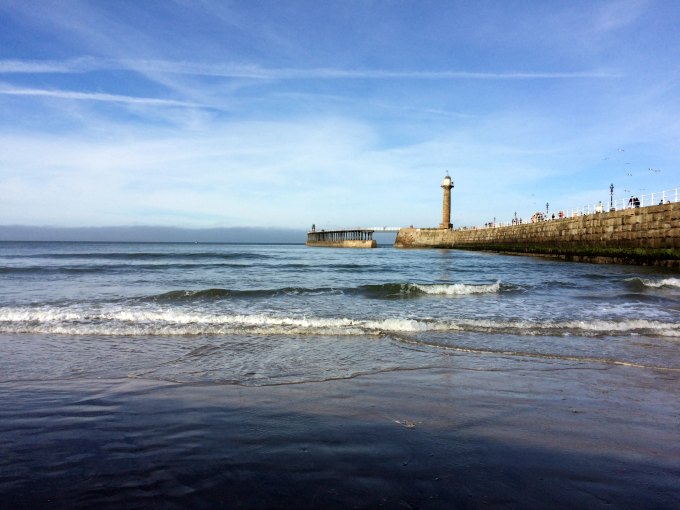 The sun was setting as we walked home after dinner and if I was wondering if this wasn’t one of the most idyllic towns I’ve ever seen, these shots put all doubts to rest. In retrospect, the Living List goal should’ve been just ‘Visit Whitby’ instead of ‘Visit Whitby Abbey’. Although the Abbey was interesting, the town is the star. 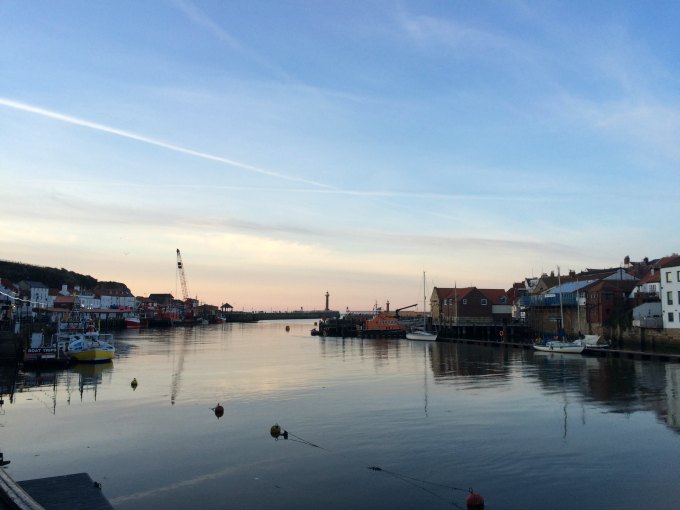 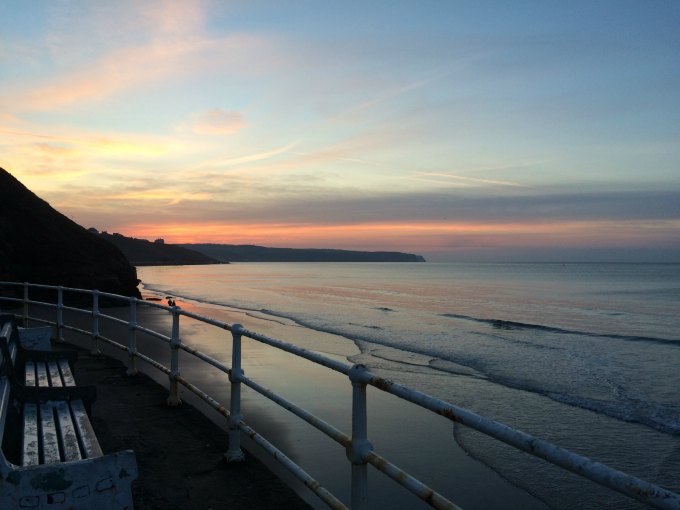 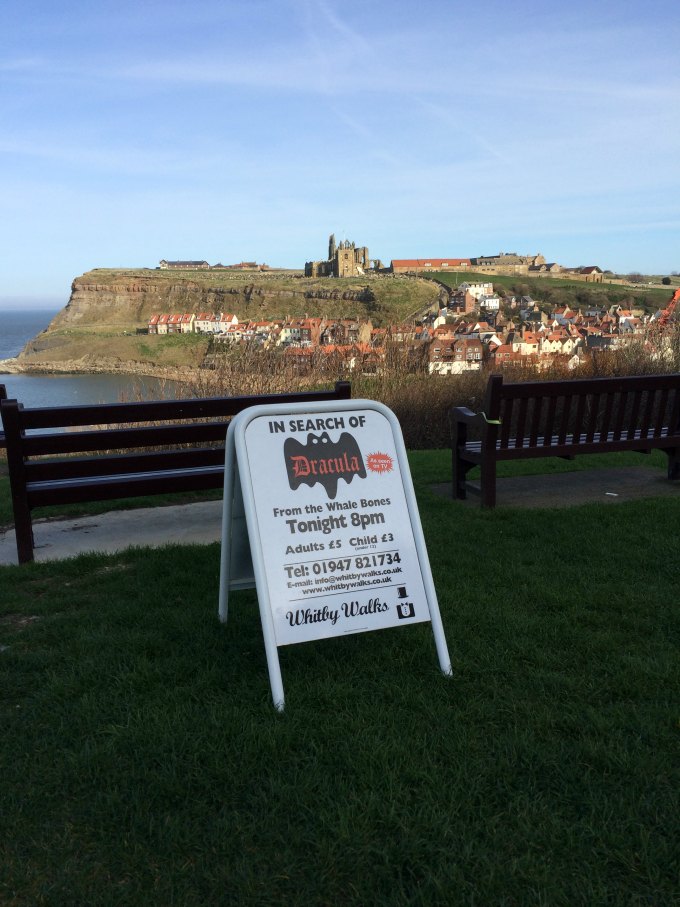 As luck would have it, we happened across this sign as we were walking home. It was 7.55pm and a small crowd had gathered to go in search of Dracula. I debated on going myself or if we all could do it (remembering my regret about the Jack the Ripper tour), and in the end I went by myself and it was a very enjoyable 90 mins. The best bit was learning about the actual locations Stoker used, either in the book or for its writing. You can discover more about those in the video below.

This tour was much tamer than the JTR one, and the kids could have gone, but never mind. Next time! There will be another, for I loved it this place. Do go.

Here’s a quick video from Whitby: