This post was inspired by a book review I read in The Australian about the release of Poems That Make Grown Men Cry. I haven’t read it yet (I’m fourth in the hold line at the local library on a lone copy), and while I am waiting I’ve been pondering what poems I’d include in a similar collection and asked some writer friends which one they’d choose. You’ll see them below, along with seven of my own. 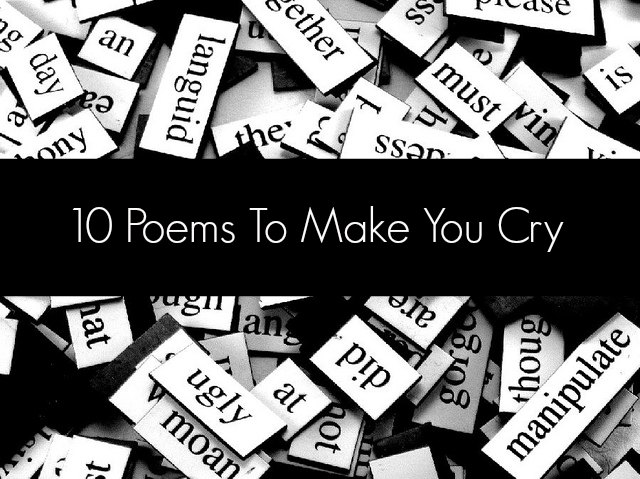 1. This Morning in a Morning Voice by Todd Boss

I first came across this poem quite by accident while using the ‘poetry spinner’ on the Poetry Foundation app (highly recommended for filling in time on public transport, in doctor’s waiting rooms, etc). This Morning in a Morning Voice caught me at first because of its familiarity and domesticity – hearing your small child toddle off to the toilet in the morning, all the while babbling/singing incessantly. It’s a familiar scenario for a lot of parents, I imagine. Todd Boss catches the homeyness of the moment, the rhythms and thumps of a child waking and walking. And then, just before the end, you’re walloped with the expansive happiness that can balloon out of such small moments – that overwhelming sense of teary amazement that you are here, and you have this child, in such a comfortable but also tenuous way. When Boss writes “joy”, I dissolve into tears of how lucky I am.

Anna Ryan-Punch is a poet, reviewer and librarian. Her blog is four hundred years ago, a baby went to sleep and is on Twitter.

At the age of 16 or 17, I started carrying Spring Morning around with me all the time. There’s a charming childlike bravado about it. I don’t know why but it’s the third stanza that really gets me, the intimate distance between ‘you’ and ‘I’, the profound loneliness of subjectivity. And yet the antidote is here too: a sort of mindful acceptance of the human condition.

Arnold Schwarzenegger reads part of it here in Kindergarten Cop:

Penni Russon is an author and her latest novel is Only Ever Always.

The poem that makes me cry is Pablo Neruda’s Sonnet XVII. I discovered Neruda when I was travelling in Europe, aged twenty-one, truly alone for the first time and practising being a grown-up. I felt raw and uncertain; reckless and free and all of Neruda’s poems bring back my fragile mercurial identity of that time in a way that makes me feel tearfully tender and protective of my younger self. This particular poem stands out because my husband and I chose it for our wedding ceremony, a day of so many joyful tears.

Annabel Smith is a novelist and her latest book, The Ark, has just been released.

Here are my seven.

I’ve said before that Dover Beach is my favourite poem; critics have disputed the year in which Arnold began its composition, and a story goes that he began it while honeymooning in Dover. If that is indeed true, one could be prompted to think that the subject matter is of a quite depressing nature for the author to be dealing with in a time of joy and wedded unity. It’s been said that the poem helped usher in the ‘fading’ years of the Victorian era, where the ‘Sea of Faith’ was indeed retreating and people began to ask questions that religion – or history – weren’t sufficiently answering. How many of us have found ourselves in the exact predicament? And where does Arnold find solace? In perhaps what makes this the perfect honeymoon poem after all – in love.

Ah, love, let us be true
To one another! for the world, which seems
To lie before us like a land of dreams,
So various, so beautiful, so new,
Hath really neither joy, nor love, nor light,
Nor certitude, nor peace, nor help for pain;
And we are here as on a darkling plain
Swept with confused alarms of struggle and flight,
Where ignorant armies clash by night.

One last note: Dover Beach’s literary influence has been substantial, having been referenced or quoted many times in the almost 150 years since it was written.

5. Fragments from a Fragmentary Mind by Penni Russon

I am an avid fan of Penni’s blog and I remember first reading Fragments from a Fragmentary Mind and just been levelled at the way she keeps a steady ‘authorial eye’, while at the same time effortlessly communicating intimacy (skills that are hard to even accomplish separately, but bring them together and it can be very powerful).

When I was editing Miscellaneous Voices*, I included this poem in the anthology and I remember sitting with a pencil in my hand one day – I was at proofing stage – re-reading this section about marriage:

and I burst into tears. The sections – domestic tales and the minutiae of details provide an overall unity and impression of the messiness of life that anyone with children and family will recognise. I like poems like that. They speak to me. It’s what the better personal/parenting blogs do, too. Penni’s is one of these.

Lehmann is one of my favourite poets and Parenthood is one of those marvellous examples of how it looks like a big, daunting read and it turns out to be a easy, moving journey, full of relatable stories and beautiful descriptions, lovingly rendered.

7. Do Not Go Gentle Into That Good Night by Dylan Thomas

Perhaps the world’s most famous villanelle, it’s a testament to the genius of Thomas that he makes this villanelle look… well… simple. He’s probably duped many a green poet to think to themselves, ‘That looks easy, I’ll write one’, only to discover that they’re hard. Villanelles, and sonnets, and other kinds of highly structured poems can feel like an ‘assembly’ of sorts when you’re writing them; elements such as rhythm and flow can take time to develop. This is a poem of anguish, a son pleading to his father not to die, to ‘rage against the dying of the light’. Thomas himself died only a couple of years after this poem was published, so that’s another layer of sadness.

Published in 2007, first in the ALR and later in the Best Australian Poems of that year, which was where I discovered it, this is a heart-ripping lyrical poem full of the understandable pain of caring for a dying spouse, but underneath that the equally painful regret of not asking for help when it was required.

Interestingly, and somewhat uniquely, if you Google this poem and you’ll also see it re-published on certain health care and information sites (usually with permission, I’m happy to add), to define what palliative care actually is. I don’t know why, but I find it moving to think that a poem, like this, could be used as a kind of educational tool, especially to an audience that might be unfamiliar with it (or poetry in general).

Also known as ‘that poem from Four Weddings and a Funeral’, Funeral Blues has had two published lives – the first was five stanzas long and had parodic overtones; the second, more famous, version of four stanzas is the one more commonly known today.

What I think gets me is the juxtaposition of the ‘pomp’ of a public spectacle, such as is implied in the airplanes, ‘sky scribbling’ and the gloved policemen, to the everyday details of grieving that are as hard (if not harder) to endure, such as the ticking of the clocks. The devastating ending line underlines it all.

Jetnil-Kijiner addressed the Opening Ceremony of the UN Secretary-General’s Climate Summit this month by reciting and bringing many in the audience to tears. It’s wonderful.

What poem(s) make you cry?

Here’s a video containing a selection of five:

*Shameless plug: Miscellaneous Voices is on sale and contains pieces from 31 of Australia’s best bloggers.